I got it from my mama

How amazing would it be to be able to exercise with your daughter, to share the gift of health, to have some special time with her and reinforce to her how strong she is, how capable she is, that she can do anything she sets her mind to. And that in all of that, that you support her, you have got her back. 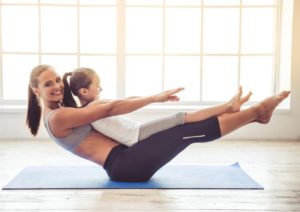 The figures suggest that six times as many girls than boys give up sports and the reasons are varied – peer pressure and the image that sport isn’t ‘girly’ or ‘feminine’, a perception that schoolwork is more important, a lack of encouragement or support to keep up team sports. In a 2017 article in the Irish Times (see link below) Sheila Wayman writes “that not only are many girls missing out on the proven physical, emotional and academic benefits that regular exercise brings, but they may also be developing health behaviours that will be hard to change as they move into adulthood”; Dr Kate Kirby, head of performance psychology at the Irish Institute of Sport states that according to research, girls “don’t want to be seen as unfeminine,” says Dr Kirby. “Sport and fitness has been traditionally associated with masculinity, particularly competitive sports”. The other turning point seems to be the transition from primary to secondary school, where girls who once ran around playing chasing or skipping now see that as ‘babyish’ and instead spend their lunch breaks sitting around, chatting with friends.

Other research has shown that the competitive aspect of sport can be off-putting for a lot of girls and that a lot of girls are swayed more by the social aspect of sport. Wayman also writes that “increased academic pressures is undoubtedly a factor for the drop-off as girls move up through secondary school” and Dr Kirby in the same article says that “girls are more mature and they recognise the long-term consequences of not studying. It would be good if they could also recognise the long-term consequences of not exercising.” 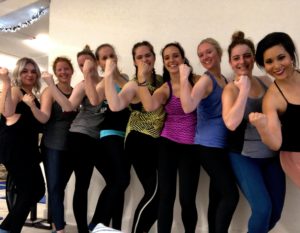 We have a duty to raise fit, healthy young women with confidence in their own bodies and capabilities when it comes to sport and exercising. We have a responsibility to build their confidence, giving them a sense of power and ownership, leaving them less vulnerable to what they see on social media. We need to watch out for each other, and for the younger women we meet. If you have a daughter, encourage her to take a break from her homework and get out for a walk (suggest some female run podcasts for her to listen to or head out with her!), acknowledge that as she enters adolescence, she might not feel 100% confident in her body and that’s ok. Lead by example in your behaviour, eat intuitively and with balance, don’t obsess over food or calories or talk about how ‘bad’ you have been or that you need to ‘work off what you have eaten’. Show your daughter that you value your body by treating it well, by eating nutritiously and moving as much as you can, your actions will influence her so much more than you know.